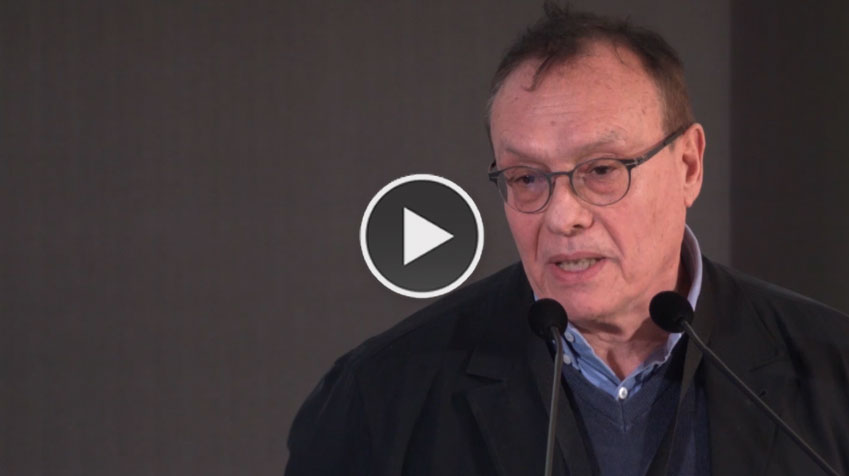 We generally think of the desert as a land of desolation, emptiness and despair, yet two billion people live in desert areas. Today most of these depend on water supplied from external sources. However, there are still desert areas with local water resources. These environments are known as Oases. They do not occur by chance; they survive thanks to careful planning and meticulous maintenance. Oases exist in arid areas thanks to the organization and dynamic management of ecosystems to create concavities and micro environments through the use of highly complex knowledge and skills. They reflect a sophisticated awareness of place passed down by previous generations through unwritten information embedded in daily life, through family cooperation and in the system of symbols. Oases are humanity’s greatest act of defiance for survival in extreme situations using proven techniques for the production and management of water where it is most scarce. So I will talk about the use of water in places where most people have no water.

In the desert, a small amount of water makes the difference between life and death. To create an oasis, water is collected using the subtle laws of nature. A depression is dug and its circumference protected with dried palm leaves. At night, when humidity condenses on the desert sand, a date palm is planted. This provides shade, creates a microclimate, protects the soil, attracts insects that together with the decay of the leaves form humus, turning the sand into fertile soil. Then fruit trees and vegetables can take root…  and an oasis is born. Even the date palm does not grow by itself; it is the product of humanity, the result of selection and domestication. Moreover, left to itself it remains a bush without a trunk. If the leaves are not pruned, it does not become a tree and does not produce shade. In the desert even pollination by insects is insufficient and the inhabitants of the oases fertilize the palm by rubbing the male flowers on those of the female palms, in a ritual that is repeated every season with songs and ceremony.

Various methods are adopted for water production. Underground tunnels capture the micro flows under the sand, rock clusters cause the nocturnal humidity to condense and aerial wells absorb the vapor from the atmosphere. Through the creation of the palm grove a process of careful production and multiplication of resources is established. This is the oasis effect: the creation of an autopoietic, self-sufficient and virtuous cycle. When water requires meticulous harvesting techniques and careful management and distribution systems, human survival is the direct result of cooperation. Without alliances and family cooperation, the oases can not exist. The close link between human existence and natural harmony imposes a series of interdictions, constraints and prescriptions, since even the most common gestures help to maintain the general equilibrium. In an oasis, the relationships between microcosm and macrocosm, between garden, kitchen garden, production and contemplation are not philosophical concepts but daily realities based on specific material needs. The interaction between the person, the oasis and the world establishes an alliance between culture and nature. Symbol and tradition become witnesses and custodians of the harmony of the cosmos.

Through the implementation of this philosophy and awareness I have recreated completely abandoned oases in the Sahara. From aerial images we identified the geographical traces of the characteristic forms of oases in deserted places; the same symbols that are recurrent in carpets and crafts. These were the remains of collection tunnels, funnels and gardens. Walking in the early morning the sand crusts confirmed traces of moisture. This way we identified the underlying structures and it was possible to reconstruct the ancient systems. Once the collection tunnels were restored, the water once again gushed out. People returned and planted palm trees and rebuilt the oases. A desert area now has water, palm groves and cultivated fields.

The oasis shows how life is the result of processes of cooperation, symbiosis and inclusion, respect and awareness of subtle and invisible laws. We do not see what water really is in a droplet, we experience only an incidental aspect of one of its many forms, a fleeting moment of its essence. Because water is not a substance: It is a cycle, as are all resources. Water landscapes are formed by water occurring in the atmosphere, underground, freely or enclosed in glaciers, in organisms, in matter, and in many other different states; all part of a single overall cycle. The creation of the oasis is founded upon the interaction and complexity of various life-sustaining aspects, both physical and intangible. The immaterial components of social, commercial and symbolic relations are combined with the three spatial planes: surface, atmospheric and subterranean. The physical and immaterial aspects are linked to each other profoundly in dynamic relationships, forming a vast multidimensional reality. Indeed, oases are never isolated even if they are created by small communities; their existence depends on the relationship between the cultivator’s space and his agro-pastoral surroundings and semi-nomadic environment. These connections have linked the Euro-Afro-Asia macro-continent throughout history, through nomadism, the great caravans and networks of trade routes through deserts. They extend the space of the oasis to an international level, spreading its interactions, knowledge and products far and wide.

Modernity has revealed the inadequacy of the oasis in the face of progress. However, the oases have existed for millennia as vital and tenacious solutions in inhospitable environments. We should rather ask how long the model of contemporary development based on seizing and destroying natural resources and wasting water can last. The oases are guardians of a profound wisdom synonymous with harmony, circular economy and the growth of local resources. The very distress that is inherent to their existence is a valuable warning and alarm bell for the whole planet. The profound lesson of the oasis is conserved in the landscape of thirst, erosion and entropy of the desert; a wealth of knowledge essential for the quest for a new model based on sustainability.

Is a UNESCO advisor for arid areas, water management, Islamic civilization and endangered ecosystems. He coordinates UNESCO, the EU and his own non-profit society IPOGEA, which implements landscape plans and projects and restores ecosystems using traditional techniques to promote processes of valorisation world-wide. Of particular importance amongst his visions, accomplishments and interventions, was the city of Matera’s nomination as a UNESCO world heritage site. This brought great success to the city and lead to it being awarded European Capital 2019. He contributed as a member of the Scientific Committee and with the restoration of Oases in the Sahara and in Arabia. He is part of the UNESCO expert group on Landscape. He is president of ICOMOS Italy and creator of the database on traditional knowledge. Over 150 publications in different languages include: Atlante d’acqua, conoscenze tradizionali per la lotta alla desertificazione, Bollati Boringhieri, 2001; La Piramide Rovesciata, il modello dell’oasi per il pianeta Terra, Bollati Boringhieri, 1995; Giardini di Pietra, i Sassi di Matera e la civiltà mediterranea, Bollati Boringhieri, Torino, 1993; Sahara giardino sconosciuto, Giunti, 1988.